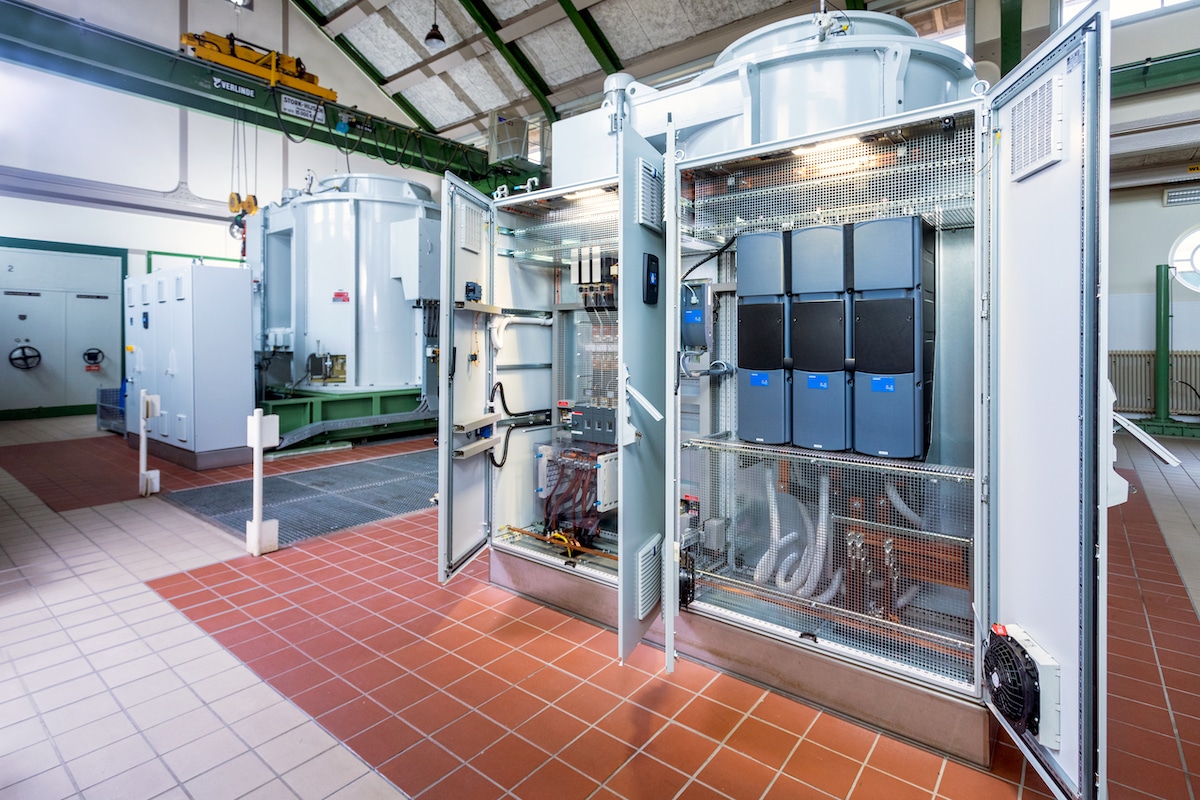 The current pumps and 690 V frequency-controlled motors of Spanish manufacturer Alconza have been in operation since 2006. One of the drives was increasingly suffering from malfunctions, and sourcing of spare parts became very difficult or even completely impossible. Therefore in 2018, the water board made the decision to replace the old drives to ensure reliable pump operation in the future.

The Zuiderzeeland Water Board is responsible for water management and drainage in the province of Flevoland and smaller areas of Friesland and Overijssel. In this region, the water board maintains all dikes and barriers, waterways, pumping stations and wastewater treatment plants thus ensuring safety for the inhabitants and sufficient and clean water. It operates seven pumping stations (three of which are located in the Noordoostpolder area), five wastewater treatment plants, fifteen sewage water pumping stations, plus thousands of smaller barriers, pumps and other equipment necessary to control water level in the province of Flevoland.

The water board electrical engineers preferred the VACON® drives from Danfoss.

Senior Electrical Project Manager Sandro Posno prepared a detailed specification including these drives. Considering the scope of the investment a public tender was not necessary.

“I invited three companies to tender, each of which were capable of doing the job. One of the reasons to invite ENGIE Electroproject to tender was the extensive experience of this company in the water management industry. Because of the complete and most attractive bid the order was awarded to this company.

“We design, execute and maintain complete projects, and perform upgrades and, if necessary, repairs of AC drives. We offer 24/7 service with relevant parts in stock. In emergency cases we can rely upon Danfoss stock in Gorinchem. Danfoss stocks drives rated up to at least 1000 kW. In this project we had to replace older drives from another brand. We aim to preserve existing cabling as much as possible, both supply- and motor cables, as well as control wiring. We coded and disconnected all connections, lifted the old cabinets and installed the new cabinets in their place. We adapted the new cabinets so all cables and wiring could be connected to the same type of terminals at the same height.  This combines highest reliability with shortest turnaround time. Upon completion we concluded that the water cooling system was the only part that needed some modifications.

“Over the years Danfoss has delivered tens of thousands of drives, big and small, to the water industry. The power-rating for pumping station Buma stands out, but especially smaller and medium-sized units have been delivered in large quantities to sewage water pumping stations, aerators, mixers in wastewater tanks, etcetera. Although we do not execute the projects ourselves, we are very familiar with the water industry and its requirements.”

The water board already operates the same type of VACON® drives at other locations. Operators and maintenance personnel needed little instruction.

“In this type of large pumping station, speed variations are small. Because of high inertia, pumps are best operated at the same speed. The drives are controlled from a central PLC. ENGIE Electroproject commissioned the drives and tuned and set the correct speeds. Basically, we hardly need to look after the drives. In case of a malfunction we scroll through the menus, but it does not take an extensive seven-day training to be able to do that.

We can run one, two or three pumps, depending on required waterflow. Running three pumps simultaneously is exceptional, this will only occur in case of really high water levels.

These situations are quite disturbing, because usually the water levels in the rivers and the IJsselmeer will then also be higher. In October 1998 we experienced nearly 100 mm precipitation in 24 hours. As a result, large areas of the Noordoostpolder were temporarily flooded. We just could not get rid of all the water. After this we built an additional pumping station (IJsvogel in Tollebeek) just to protect that particular area from flooding even in extreme situations.

The drives and electric motors are liquid cooled. The water that cools the drives flows through the heat exchangers in a closed circuit. The heat exchanger is cooled by a second closed circuit which is cooled by the discharge water from the pump. Circulation in both circuits is controlled by frequency-controlled pumps. Liquid cooling is quieter than air cooling, which is an advantage in populated areas and in summer with elevated ambient temperatures.

After a pleasant introduction we take a tour through the pumping station when one of the motor-pump sets is started. The 28-pole motors run at approximately 23 Hz, equivalent to 98 revolutions per minute.

The pumps start at no-load. Only when the pressure reaches a preset level the exhaust valve will open, and the pumping station will start to discharge water. Thanks to speed control and the robust construction of pump and motor the sound level is surprisingly low even under nominal load and a normal conversation next to the higher than man-sized motors is possible. This is a pleasant observation

Today, we have proven and reliable solutions to meet many of our climate, urbanization, and food challenges. Driven by the power of an electrified society and fueled by the opportunities of going digital, Danfoss is dedicated to engineering solutions that can unleash the potential of tomorrow. With the promise of quality, reliability, and innovation ...

Efficient and Flexible Drive Technology for the Doemens Academy

Condition Monitoring Using The Drive As a Sensor In Pumping Applications