These lithium-ion batteries must be tested in battery test facilities to ensure that they comply with performance requirements for automotive use and use as stationary storage. Since the end of 2016, eight additional metering systems from LEWA GmbH have been used in this process for tempering the traction batteries at Deutsche Accumotive GmbH & Co. KG, a company based in Germany.

Two circuits for the water-glycol mixture (one for each test sample) ensure precise control of the flow rate and the pressure.

As far back as 2009, similar LEWA systems have been working in fully automatic operation at the test facilities around the clock seven days a week. When test capacities were being expanded in 2016, once again the LEWA systems were chosen thanks to their reliability and high quality. “The working range of the structurally identical metering systems, which are designed for a wide temperature range of the test fluid from -30 to +85 °C, is sufficient up to a pressure of 10 bar,” says Roland Schwab, Product Manager at LEWA. The flow rate is somewhat larger than it was for previous units and can be set separately for each circuit between 30 and 900 l/h. The duration of the test cycles is between a few minutes and several hours. This way, worst-case scenarios can be used to determine service life during extreme operating conditions.

The 1.1 x 0.8 x 2.1 m (L x W x H) unit is divided into different layers: The first consists of a base frame, a leakage pan and a cooling water connection. The second includes a tempering unit, metering pumps, measuring instruments and process connections. The third consists of a control cabinet, operating unit and interfaces. All components are mounted on the same base frame, which can be moved by means of a lift truck and includes a pan made entirely of stainless steel for the collection of possible leaks. All components are arranged this way in order to provide users with optimal access to and easy operation of the system. The actual system components are furnished with thermal insulation so that the ambient temperature has no influence on the fluid temperature and its gradients. “This is a mandatory requirement for being able to achieve a reproducible result in dynamic switching tests with different process temperatures,” says Schwab.

The water-glycol mixture, the ratio of which is always unchanged, is adjusted to the desired operating temperature by the tempering unit and then circulated in a closed circuit. From this circuit, the metering pump system sucks a defined flow rate, which is divided into two parallel, independent metering circuits. The tempered fluid is metered through the traction batteries and is eventually fed back to the closed circuit. The quantity of liquid is measured continuously with the aid of a vibration limit switch, and a warning message is issued promptly in the event of a low level. “This allows the system to be refilled during operation without affecting function,” explains Schwab.

Working with the systems in practice revealed where improvements were needed. The construction of the pumps was adapted, along with the interfaces for the process control system supplied by the customer. The control and handling of the systems were also improved. “To ensure that the traction batteries which are to be tested are not damaged, the maximum discharge pressure can be variably limited. If the preset limit value is exceeded by more than one percent, even for only a short time, the metering pump is switched off and the malfunction is reported,” explains Schwab. The system should also have a very high absolute flow rate accuracy throughout the entire pressure and temperature range.

In order to ensure the required reproducibility and stability, an advanced combination of flow rate and pressure control was required. These parameters are controlled symmetrically by the LEWA software. If both actual values lie below the target values, the flow rate is increased until one of the limit values is reached. If a target value is exceeded, the flow rate is immediately adjusted so that one of the two actual values is equal to the target value and the other is equal to or below the target value. When this method is used, the set maximum pressure is never exceeded, meaning that the insides of the batteries are not damaged.

This article is published by LEWA GmbH 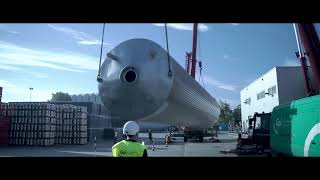