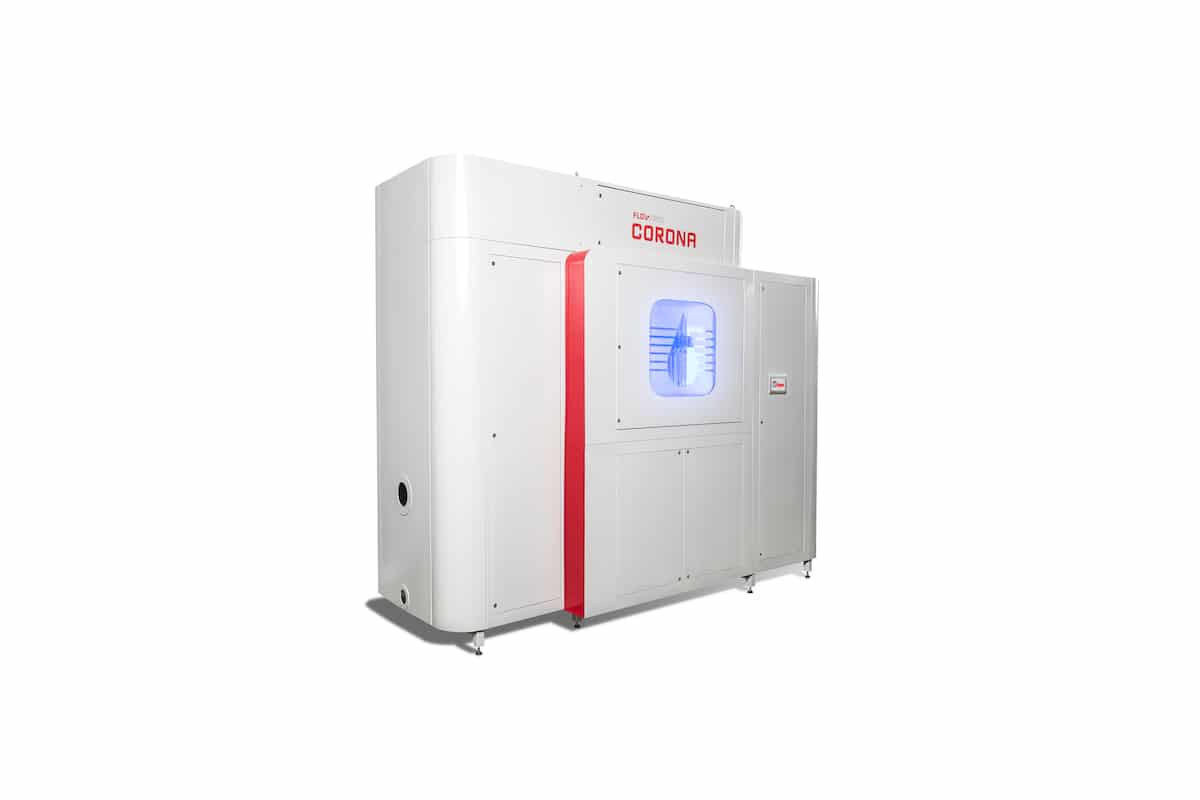 The treated water is then allowed to pass through the plasma volume with high specific plasma-water contact surface area. Maximizing the contact surface area allows for abundant OH- radicals to be formed on the interface, contributing to effective oxidation of dissolved pollutants.

Intuitively, generating electric discharges to treat water may sound energy intense, but the basis for the Flowrox Corona process is in an accurate focus of electric energy to the point where it is needed on a molecular scale, which translates as a sophisticated means of igniting the desired oxidation reactions at minimal energy input. Various reactor configurations with different kinds of plasmas have been studied for water treatment applications and generally it has been observed that a straightforward gas-phase discharge, brought in contact with liquid water, is a better solution than attempting to breaking the discharge through water with submerged electrodes.

Again, intuitive as it might be to create the plasma right through the water for ultimate contact, this approach suffers inevitable energy losses as it relies on water vaporization to form a conductive pathway for the discharge propagation. Flowrox Corona combines the very high plasma- water contact surface area with the advantages of a simple gas-phase electric discharge.

Plasma, often referred to as the fourth state of matter, is basically ionized air or some other gas or gas mixture. Ionization of air enables an electric current to pass through it. In perhaps more colloquial words, plasma basically means electric discharge, such as a lightning strike, what you see inside fluorescent lights, or the spark between a car engine spark plug’s terminal. It is convenient and important to separate types of plasmas into thermal and non-thermal ones.

The equation describes how an electron (e-) colliding with a water molecule (H2O), with a very high energy, splits it into an OH-radical and what is called atomic hydrogen (H). The atomic hydrogen is scavenged by ambient oxygen to form a hydroperoxyl radical, also an oxidant, and the OH-radical will react instantaneously with surrounding substances. Since the radicals are formed from the treated water, it can be said that in plasma treatment the water actually purifies itself! Due to the high reactivity of the OH-radical, it is inherent that many of these will be consumed in useless decay reactions. On the other hand, it also means that residual OH-radicals are not found in the treated water through the output of the reactor. As the efficiency of the Flowrox Corona process lies in the appropriate focus of energy into heating electrons and not ions, the efficacy is based on the sheer abundance of the OH- radicals on the plasma-water interface.

Another important oxidant formed in the process is ozone. Ozone is produced from the oxygen in the ambient air, and indeed, the process efficiency can be ramped up with an accessory oxygen concentrator coupled to enrich the inside oxygen concentration. Enriched oxygen concentration has been observed to even double the plasma oxidation energy efficiency. However, while important, ozone plays a secondary role in the oxidation process as the OH-radicals are generally attributable to 60-80% of the oxidation work. The roles of these oxidants depend on the composition of the wastewater; OH- radicals can react with compounds that exhibit a refractory character towards oxidation with ozone.

The original motivation for direct plasma treatment of water was to create a fundamentally more economical alternative to conventional ozonation. The core idea was to generate the oxidants right where the water is and harness the power of OH-radicals, whose formation is a notable benefit when the plasma is brought in contact with water. It was also considered important in the early design phase that the system should be very robust, tolerate harsh conditions, have no moving parts and exhibit no electrode erosion attributable to electric discharges. These features were finalized into the current Flowrox Corona design and the result is really a low maintenance system that has only stainless steel in contact with the water, no moving parts and zero observed electrode erosion. Another distinctive feature for Flowrox Corona is its ability to tolerate high conductivity waters, which is not an obvious feature for a system that brings electric discharges together with water. Flowrox Corona can be operated with no extra chemicals, using only electricity. As an accessory product, the unit can be equipped with an electricity driven oxygen concentrator, which can boost the overall energy efficiency considerably: enriching the oxygen concentration from ambient to 60% can double the efficiency.

Flowrox Corona technology has been tested in the treatment of various waters, wastewaters, process waters, cooling waters and simulated model solutions. Testing has included monitoring of specific target compounds as well as collective parameters of general interest, such as color, odor, COD, BOD, TOC etc. The technology has also been piloted for drinking water disinfection which is one of the most promising tasks while enjoying parallel benefits from simultaneous odor and color removal.

The majority of suitable applications deal with the destruction of organic pollutants. Some inorganics may also be well susceptible towards a reaction with the oxidants: metals can be removed from organometallic complexes and oxidized to a higher valence state, nitric and sulfuric species can be oxidized into nitrates and sulfates etc. Aromatic hydrocarbons and other organic pollutants, with unsaturated double bonds in their molecular structure, are facile targets for plasma oxidation. The simplest structures are often the most refractory ones, such as low molecular weight organic acids like formic and oxalic acid. Conveniently however, these kinds of compounds may often be environmentally benign and easily biodegradable. While these guidelines can be useful for estimating process applicability against given pollutants, it is important to understand that they are generalizations among typical scenarios and essential exceptions.

Phenol is a typical model substance used in studies of new oxidation technologies to provide a point of comparison in performance and energy efficiency. Flowrox Corona technology has proven remarkable performance in phenol degradation yielding 88 g/kWh removal efficiency in operation with ambient air and an even more impressive yield of 138 g/kWh at enriched oxygen atmosphere (initial concentration 100 ppm). Another study for furfural removal from 500 ppm yielded 133 g/kWh efficiency in basic solutions and 182 g/kWh in acidic ones, which demonstrates very high figures and gives an example of the effect of pH on efficiency. It is worth pointing out, however, that on the contrary to the experiences with furfural, high pH is often beneficial for the oxidation energy efficiency due to certain pH dependent ozone reaction pathways, which emphasizes that the water quality is usually the major variable. A large group of other pollutants with cyclic molecular structures are pharmaceuticals, most of which have one or more cyclic moieties in them. A large group with many individual compounds tested for plasma treatment as pharmaceuticals are discussed in more detail at a later paragraph.

Organic acids like formic, oxalic, acetic and succinic acids are also popular model compounds. They exhibit lower reaction rates with oxidants and for these properties provide good subjects for scientific studies. In practice they are seldom a problem due to natural biodegradability and overall harmlessness. These low molecular weight substances are typically more refractory than the heavier and aromatic hydrocarbons, and while the Flowrox Corona technology has shown comparatively high oxidation rates with those as well, few practical applications are encountered in industrial operations. Yet, while low weight organic acids may not be a very interesting target for pollutants, in many cases an effluent stream that requires further COD reduction may very well contain organics in this form. COD reduction in turn is a very common and increasingly sought-after operation for further polishing of WWTP effluents, and most Flowrox Corona pilot projects so far have focused on COD reduction. COD can be removed with plasma oxidation from municipal WWTP effluents, pulp and paper industry wastewaters, and for example textile industry wastewaters at very high yields. A recent project demonstrated a remarkably low energy consumption of 4.7 kWh/kg COD for 50% COD reduction from a biologically treated wastewater effluent at a mere 0.7 kWh/m3 Flowrox Corona plasma energy dose.

Pharmaceuticals compose the widest single group of chemicals studied for degradation of various waters with the Flowrox Corona technology. More than 30 chemicals have been observed from municipal, hospital and institutional wastewaters. The technology has been proven to substantially cut the pharmaceutical load to the environment when installed either to a point source such as a hospital sewer line before connection to municipal network, or at the end of an WWTP to serve as tertiary treatment. Higher number of pharmaceuticals with higher concentrations occur in point sources like hospital sewage, which make it a convenient place to cut the content before it’s diluted in the network. Even the complex mixture at a very high COD characteristic to untreated hospital sewage has been observed to be a feasible medium for Flowrox Corona treatment, as the results have shown that regardless of the composition, the pharmaceuticals occurring in nano- to microconcentrations are almost or completely degraded below analytical level of detection at 0.1- 1 kWh/m3 plasma energy dose. Since the transformed species are not visible in analyses, unless specifically determined, further studies have been conducted to ensure that possible transformation products are also affected: indeed, any identified transformation products, including those from partial oxidation in the beginning of the process, have been observed to degrade further and even completely mineralize into CO2 and water, which is seen as TOC reduction.

Color removal is another typical task for an AOP. While high color and turbidity naturally exclude processes relying in UV light, plasma treatment is insensitive towards turbidity because the oxidants are produced on the gas side of the liquid surface and no light transmission through the liquid media is required. Color removal can be thus very efficient, the efficiency depends on various treatment parameters and the composition of the color itself.

One of the most potential applications for plasma treatment is disinfection of drinking water. The parallel benefits complementing disinfection include destruction of organic micropollutants, removal of odors and residual color (e.g. humic acids). In a previous project the system was used for a full year- around disinfection of a drinking water in a city waterworks station. During winter, a modest 0.01 kWh/m3 plasma energy dose was enough to keep the water disinfected. More difficult conditions in summer,0.03 kWh/m3 was observed to ensure proper effect.

This article is published by
Flowrox Oy

No Sleeve Change After 10 Years