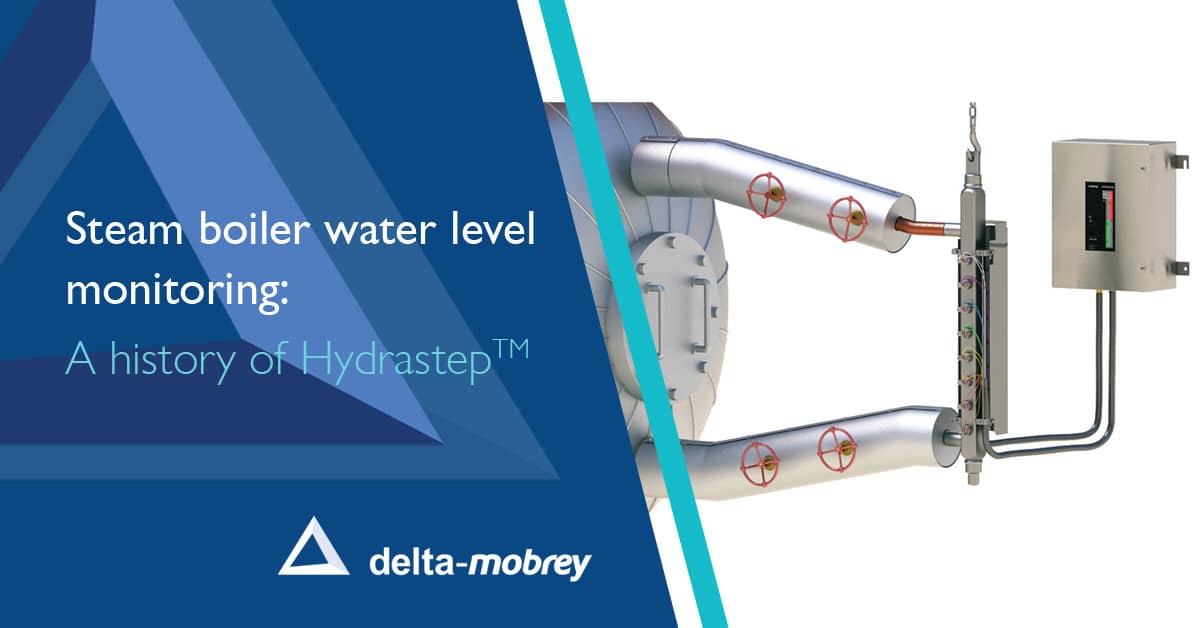 The Hydrastep steam and water gauging system has been around for many years under a number of different guises. This article describes its beginnings and how it evolved into the product we know today.

Conductivity probe instruments such as Hydrastep were originally developed as an alternative to sight glasses for steam drums, also referred to as boiler drums or feed drums. Sight glasses, vertical columns attached to the drum with a glass window for level indication, can be difficult to read and originally had no means of monitoring from a remotely positioned control room. Conductivity probe instrumentation provided an alternative to this.

Later improvements to sight glasses included using refraction of a backlight, and then CCTV for remote viewing. Even so, steam water gauging systems based on conductivity probe technology give a clear visual display both locally and remotely and have become the preferred solution for steam drum level indication.

Hydrastep was developed in conjunction with the CEGB, the UK’s Central Electricity Generating Board in the mid-1960s. Referred to as the Hydrastep 7, the system comprised of a vertical water column mounted to the steam drum with a series of probes spaced along the column. These were linked to the electronics mounted within a large floor standing cabinet with a visual display. This replaced an even earlier version, though there is little known detail of this.

The large cabinet mounted system was superseded by the Hydrastep 2457. This is the earliest model with any known documentation and was manufactured by Schlumberger in Farnborough. This was launched in 1975 as a lower cost and smaller version of the Hydrastep 7.  The Hydrastep 2457 had local and remote displays, and relay outputs for level and alarms, but no other output to integrate to a customer’s control or monitoring system.

A later model, the 2457N, had hazardous area certification.

An output was needed to interface with control systems and so a 4-20mA current output was added to indicate level. This was launched as the Hydrastep 2467 around 1985.

Both the Hydrastep 2457 and 2467 assumed the lower half of electrodes were in water and the upper half in steam, and could only detect contamination of electrodes in steam. They therefore only needed a single wire connection to the lower electrodes, but a two-wire connection to the upper electrodes. The remote level display LEDs were individually lit by drive signals from the controller, so requiring cables with numerous cores.

The Hydrastep 2468 was introduced in 1993. This had a number of improvements, one of which was being able to detect contamination of any electrode and so it now required a two-wire connection to all the electrodes. It offers a flexible number of electrodes with several remote display options which are now driven by digital communications, so reducing the cabling requirements.

The electrodes are key to Hydrastep’s proven reliability in the field. The 1990s saw considerable research and development in the electrode. Various materials and bonding methods were trialed. The result is a range of electrodes comprised of exotic metals and ceramics. The key to their success is a highly guarded proprietary brazing method of controlled temperatures and pressure cycles.

Hydrastep’s history spans almost five decades. Its reliability is second to none, and it is well known and respected, not least within the power industry. While other technologies such as differential pressure or radar are also used for steam drum level measurement, Hydrastep has become the preferred choice for level indication as the display is separate from any monitors and gives an immediate and clear level indication within the control room. Outputs are often used for alarms and trips for emergency shutdown.

The Hydrastep name has been synonymous with conductivity probe level measurement to the extent that even competitor’s equivalent products are often referred to as Hydrastep. It is expected that future developments will mean the Hydrastep name will continue well into the future.

Click here for more information about Hydrastep 2468
Click here for related articles and news
Search for level meter manufacturers in our equipment guide
This article is published by
Delta Mobrey Ltd.

Ensure the Reliable Performance of Your Water Level Controls