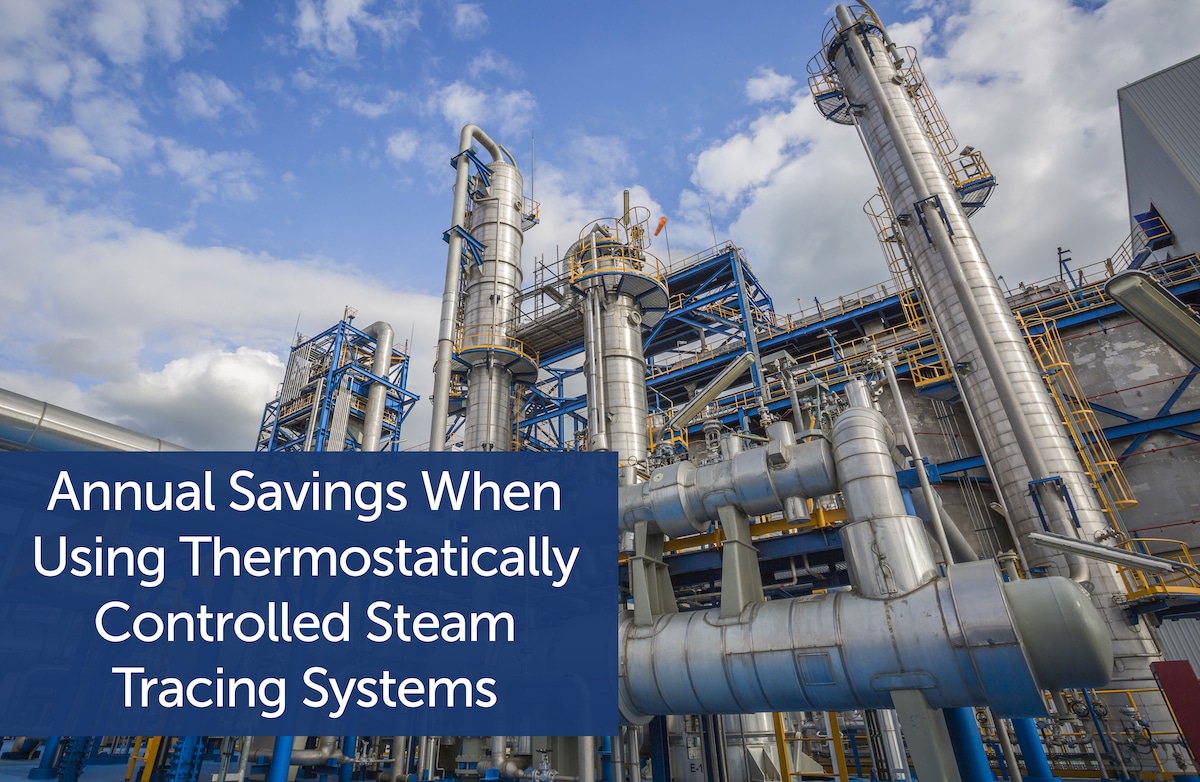 During cold weather, exposed fluid-carrying piping and systems must be properly winterized to prevent freezing. Without adequate protection from the elements, low temperatures can easily result in frozen lines, increased liquid viscosity, and costly damage to sensitive equipment.

To prevent process interruptions, facilities turn to heat tracing to keep their systems operating, even in the face of harsh winter conditions.

Properly controlling steam tracing is critical to effectively utilizing the media and minimizing overall expenses. Typically, steam tracing is turned on in the beginning of the winter season and left on until Spring.

While this eliminates the chance of freeze damage from forgetting to activate the steam supply, steam is wasted on those days that temperatures are above freezing. A better solution is to install self-actuating thermostatic valves to automatically control steam flow.

In an example Philadelphia, PA system with an estimated 5,088 total operating hours in the freeze season, historic data from the U.S. Weather Bureau was used to determine an average of only 2,895 actual hours where freezing could occur. When directly compared to a manual “leave it on” system, a thermostatically controlled system’s savings on wasted steam supply were found to be roughly $8,772.00 per year.

Steam traps are an essential component of steam tracing systems to purge condensate and non-condensable gas that forms in steam lines. Often used to avoid unwanted condensate from entering a system, the traps allow steam to reach its destination as dry and clean as possible.

Conventional steam trap design limitations however often result in live steam losses and temperature variations on piping, which may detrimentally affect the processes that they supply.

An alternative to conventional steam traps is thermostatic steam traps. These self-actuating thermostatic valves bleed off condensate from the traced system only once it has fallen well below the saturated steam temperature. The condensate forms a liquid seal ahead of each valve preventing live steam losses.

Most properly functioning conventional steam traps have inherent live steam losses that studies have shown increase with time: at least 2 lbs./hr. for inverted bucket traps, and up to 20 lb./hr.  for disc traps after less than one year of service.

The calculation also considers that the thermostatic valve discharges condensate at a lower temperature than conventional traps, thus accruing additional savings (calculated based on the value of the heat content at varying discharge temperatures).

Following the example system calculation cited above, a typical steam tracing system using thermostatic steam trap valves can expect to save at least $354 per valve, per year.

When considering further associated costs including valve cost and elimination of installation labor, the simplified return on investment (ROI) is an estimated 4.02 or 402%.

For over 30 years, ThermOmegaTech has been the world leader in the design and manufacture of self-actuating temperature control technology. ThermOmegaTech serves a multitude of industries and, as a result, creates solutions for a wide-range of applications. As the developers of highly-reliable and cost effective freeze valves for the railroad industry ...

Manual vs. Thermostatic Freeze Protection Valves – The Cost of Human Error in an Industrial Environment