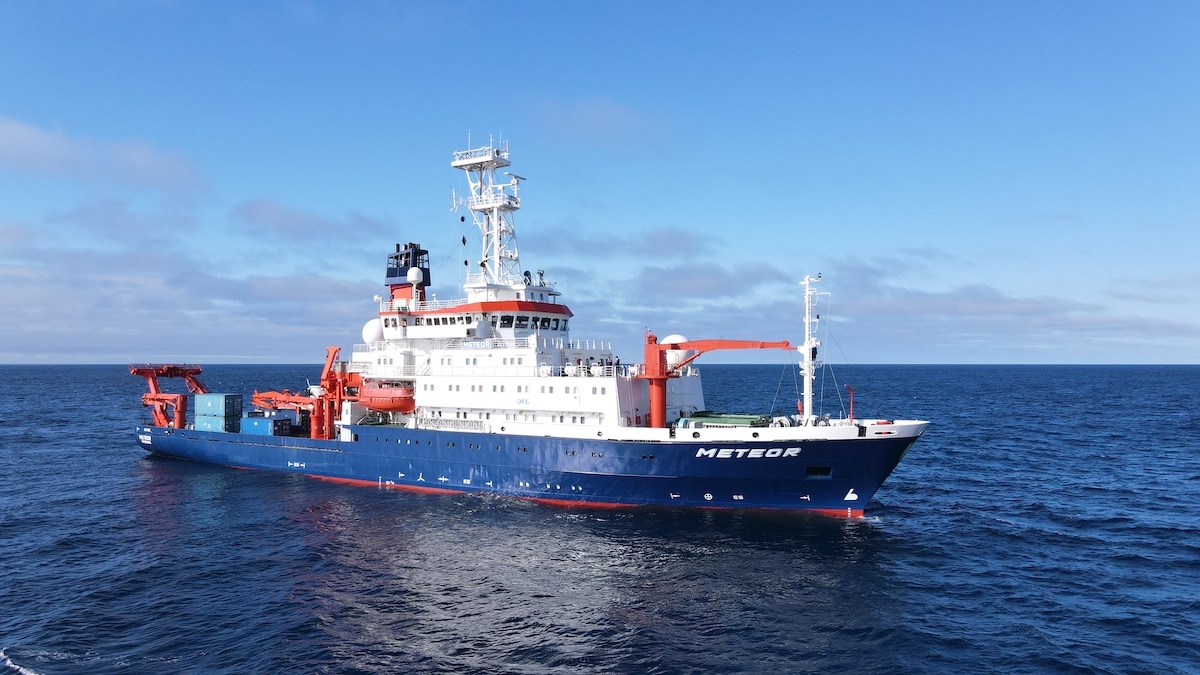 Research vessels perform a wide range of tasks on the oceans of our world. They are scientific laboratories on the high seas and indispensable instruments when it comes to understanding the Earth system.

A whole range of marine research fields in the fields of biology, geology, geophysics, glaciology, geochemistry, oceanography and meteorology are covered, and Katronic KATflow 100 clamp-on, non-invasive ultrasonic flowmeters are performing an important function to support this vital work.

The RV METEOR is a globally operating, multidisciplinary research vessel owned by the Federal Republic of Germany, operated and coordinated by the LEITSTELLE DEUTSCHE FORSCHUNGSSCHIFFE / University of Hamburg and managed by BRIESE SCHIFFAHRTS GmbH & Co. KG / Department FORSCHUNGSSCHIFFFAHRT. METEOR’s missions are under the control of the Federal Ministry of Education and Research and the German Research Foundation, on whose behalf it explores the seas and oceans of our Earth. In this context, RV METEOR fulfils, among other things, two specific functions: Firstly, it determines typical oceanographic parameters such as conductivity, salinity, temperature and density of the surface water (down to a depth of approx. 6 m) using a socalled thermosalinograph system and makes the results available to scientific databases and analysis systems on land. Research institutions and groups active in marine research can then make use of these data. For example, temperature changes measured in a delta provide information on how freshwater inputs into seawater vary. This makes it possible to draw conclusions about climate and ocean current changes and ultimately leads to a true picture of today’s ocean circulation.

METEOR’s second task is to continuously measure the sound velocity, which changes between 1400 m/s and 1800 m/s at the surface of the oceans due to fluctuating oceanographic parameters, in order to calibrate acoustic echo sounding systems. Incorrectly calculated sound velocities would lead to errors in the echo sounder calibration and ultimately to incorrect ocean cartography.

Oceanographic parameters essential for the precise determination of the speed of sound, such as conductivity, salinity, temperature and density of the seawater medium, are continuously determined and recorded. For this purpose, the 8-18 °C cold seawater is permanently pumped through measuring containers in flow-through systems. For the control and monitoring of the system technology, the process parameters flow and pressure are of prime importance and are also recorded for later validation of the data. Without valid process parameters there are no valid measurement results. Additional optical measuring methods in operation require continuous flows to avoid turbulences in front of the sensor optics. Constant, drift-free and temperature-stable flow rate determinations are an absolute prerequisite for the control of these measuring devices. As the shipping company itself explains: “While the high-precision and exotic scientific sensors often act like divas during operation, the process-related sensors should be exactly the opposite. Stability, reliability and robustness are required here.”

The operator made several demands of the flow measurement system. The most important characteristic for the research was a non-contact flow measurement of the seawater, avoiding contact with invasive measuring probes, metals or plastics in order not to influence the seawater chemically and thus distort analysis results. The process sensor technology should also be as compact as possible in order to be able to construct short pipelines free from flow-influencing geometries. As several higher-level systems have to be supplied with measurement results from the process via interfaces, it was necessary to find devices that offer a wide range and flexibility of interfaces.

Following detailed discussions to determine the specific requirements of the project, two KATflow 100 non-intrusive clamp-on ultrasonic flowmeters were installed on PVDF pipelines of nominal diameter DN 25 … 40 mm on board the METEOR.

From a general point of view, the results of the continuous flow measurements on the METEOR led to conclusions about system conditions with regard to organic fouling and sedimentation in the pipeline systems and at sensors and, of course, whether pump and valve controls are set correctly.

“Overall, the flowmeter plays a central role. Without flow recording, everything we measure in these systems is actually meaningless”, says Mr Wolf, one of the responsible technical inspectors at the shipping company. “BRIESE SCHIFFAHRTS GmbH & Co. KG has found a reliable partner for this purpose in the Katronic flow measurement systems. Since 2014, the scientists have been able to carry out a steady validation and classification of the determined data without any failures.” To this day, the system measures flows in scientific analysis systems for pure seawater and archives them as evidence for research.

Click here for related articles and news
Search for flowmeter manufacturers in our Equipment Guide
This article is published by
Katronic AG & Co. KG