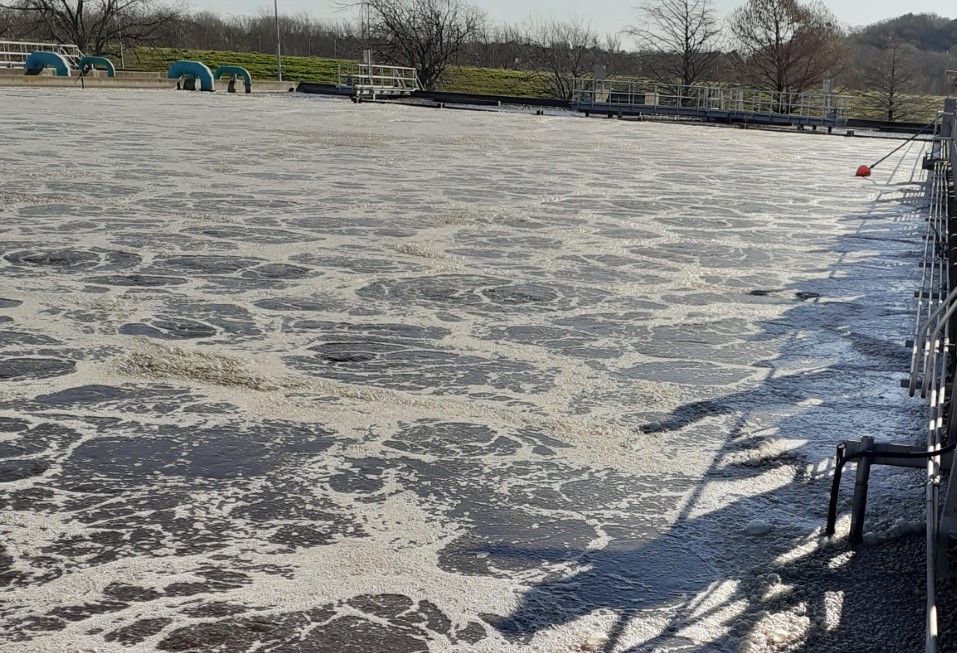 During a week-long exercise, the performance of each of the blowers was monitored using the thermodynamic technique, with measurements taken every 5 minutes for:

From this, the following were calculated:

The Thames WWTW operates in tandem with another site (typically 32-35Ml/d), as it takes the residual load within the catchment.  As a result, there is a broad operating range, for which the aeration requirements need significant flexibility in blower output.

There are 20 aeration lanes (numbered 3 – 23) in use and 7 operational blowers that serve a common header that supply them with air.  The blowers are of the centrifugal type, split into 2 different sizes:

There is a ninth blower, Blower 6, on the low voltage system, which is a high-speed turbo-type unit (285kW, 400V).  This unit, however, has been recently installed and is still awaiting completion of final commissioning works.  As such, it was not run at any time during the logging period and is not included in any of the following analyses.

All seven operational units have the ability to deliver variable flow rates individually through the use of their individual inlet guide vanes.

All available blowers ran during the course of the logging period, with a wide range of operating flow rates required (20,000-90,000Am3/h), producing the need for a solo operation to all 7 blowers in parallel.

For 59% of the time, the blowers operate at more than 73% efficiency.  The rest of the time is spent at efficiencies below 72%.  This time includes operation during disruptive periods when there are planned change-overs from grid power supply to onsite generation. This shows that the site’s control of the process is relatively robust, with limited impact on overall average aeration performance.

Interestingly, it is noticeable that when there is a reduction in efficiency, it coincides with the removal of one of the HV blowers from the operation.

The blowers have to overcome the differential pressure in order to deliver the desired flow of air to the aeration lanes.  There is a combination of frictional losses in the delivery pipework and diffuser head arrangement (as well as static pressure), due to the height of fluid above the diffuser heads.

In this case, the full range of operation of all the blowers was needed, providing a good relationship for the system pressure requirements for any flow. Static pressure of 445mbar translates to an effective level in the lanes of 4.5m above the diffuser heads, and approximately 512mbar is required at the maximum flow rate (90,000Am3/h).

It is important to note that this system characteristic also encompasses all leakages and blockages – and any partially closed valves.  It is known that a proportion of the diffuser heads have been identified for replacement in the coming months.  Greater OTE (Oxygen Transfer Efficiency) should occur with a larger area of interface between air and liquor, reducing air demand per unit of BOD. The control valves will operate more within their optimum operating ranges (usually 30%-70% Open).

During the logging period, there were 8 prevailing operating combinations (i.e., >10% utilization) that constituted 77% of the total time run, all of which had average efficiencies of between 73.3 – 74.1%.

The most efficient blowers are Blowers 1 & 2 (at 80% each) and the least efficient is Blower 5 (at 67.5%).  It should be borne in mind that as inlet guide vanes are closed, there is some sacrifice to efficiency.  However, Blowers 1 & 2 can both achieve 80% efficiency – and so it is fair to expect that the other blowers, of the same manufacturer and type, should be able to achieve the same performance, through remedial works.

The electrical power for each unit of air or oxygen supplied to the aeration lanes has an average requirement of 0.018kWh/Am3 or 61.9kWh/TO2 (equivalent to £6.81/TO2).

As air demand increases, so does the cost of oxygen supplied.  Moving from the average flow of 18.5TO2/hr at 62kWh/TO2 to the most common operating conditions between 6 and 7 blowers operating (22 TO2/hr), there is an increase in specific power of 3.2%.

With clean lanes and new diffuser heads, it would be expected that the mass of oxygen should reduce (for the same average biological load) as the Oxygen Transfer Rate (OTR) increases through better bubble formation and distribution.  It should be noted that OTR is related to the area of the interface between the liquid and the air.  Smaller bubbles in greater density will address this.

Downstream, in each of the 20 aeration lanes, the dissolved oxygen (DO) is measured in two locations at progressively different parts of the aeration process.  One important observation is that the DO readings appear high (3.2 – 5.5mg/l), given a Set Point expectation of approximately 2mg/l as a final output.  High DO will mean considerable additional energy usage because more air is supplied than needed.  It can also have a negative impact on the settlement of the sludge downstream, as natural flocculation is less effective.

There are no flowmeters on Blowers 1 – 3 but they are operating close to 13,000m3/h each.  It would be recommended that a flowmeter is added to the combined output of these three blowers (there is insufficient room to install a flow meter on the discharge of each blower).  This would allow the construction of KPIs (e.g., kWh/m3, m3AIR/BOD removed, m3AIR/m3INFLUENT) for benchmarking purposes.

When the diffuser heads have been replaced in each specific lane, the control valves need to be addressed. 29 of the 40 control valves are currently operating outside the recommended operational range of 30-70%, which means they will not be working effectively.  This will be because of greater than expected flows downstream, possibly due to burst diffusers or leaks.  Replacement of the diffuser heads will remedy this – and greatly improve the control of lane-specific DO.

It is also noticeable that the guide vanes are used where VFD’s could provide a similar effect (with some attention to the FDS and PLC logic used).  This would have the advantage in that there would be only a marginal change in isentropic efficiency, with a change in speed, yet the blower shaft power would be substantially less.

For the full range of flows measured over the logging period, using a variable speed drive throughout – instead of the inlet guide vane control – would give Thames Water a potential saving of £20,000/year ($27,500) – (1.8%/yr).

Given the additional costs surrounding 3.3kV inverters, and the associated equipment, the costs to achieve this for Blowers 1 – 3 could be prohibitive.  However, Blowers have a 250kW rating, and generally demand an electrical load of no more than 230kW.  There could therefore be a comparison of 3300V inverter retrofit to 415V electrical infrastructure replacement, making all equipment Low Voltage.  This has advantages of its own: safer to operate, ease of spares, less costly to maintain – and lower initial capital cost.

The original equipment manufacturer’s (OEM) performance curves were not available.  However, it is fair to assume that the same efficiency should be expected of all of the Blowers.  Blowers 1 & 2 both achieved an average of 80-81% over the logging period – and both operated more than 95% of that time.  If all the other blowers were able to achieve the same efficiency of 80%, this would give Thames Water a total saving of £ 87,500 ($120,000) /year.

With Blower 6 part-way through commissioning, it is evident that there is a perceived advantage in choosing a turbo-type blower over the existing centrifugal types.  It is recommended that before further replacement occurs, the post-refurbishment performance is verified; thus, providing an alternative to the introduction of further new technology.

Hybrid-type blowers will provide larger turn-down ratios of 3:1 relative to the much narrower performance of the centrifugal types.  However, there is a trade-off with a lower efficiency of max of 75-77%.  Turbo-type units have a narrower turn-down (max 2:1) but a higher peak efficiency (82%) – although efficiency falls away either side of its best efficiency point. Purchase and maintenance costs also tend to be higher than hybrid or the status quo.