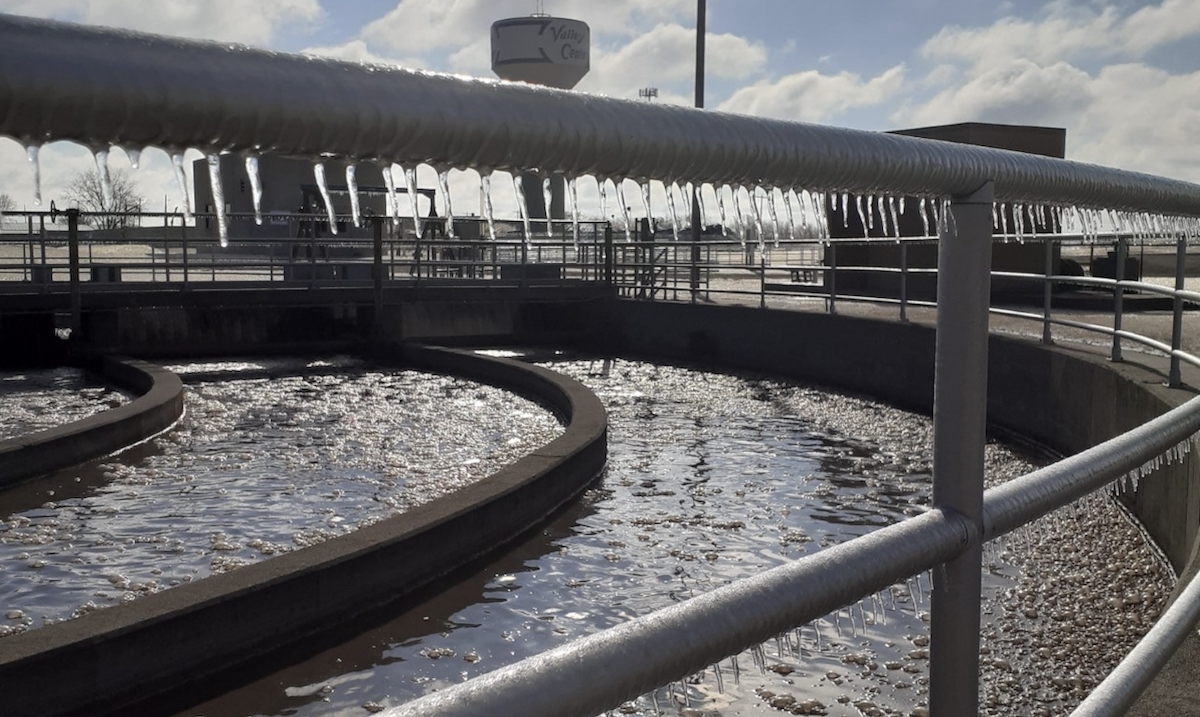 At Valley Center Wastewater Treatment Plant, and at an increasing number of facilities across Kansas, the decision to buy the more expensive equipment at the outset is proving to be the most economic. Savings in long-term maintenance are important, but in the shorter term, energy savings are fundamental.

“Total cost of ownership is what we at the plant and our city council are interested in”, said Valley Center’s Utility Manager, Wade Gaylord.

“There’s always a cheap, short-term solution, but it is our duty to act in the best interests of the city and our residents to spend our budget as wisely as we can, which to me it just plain common sense”.

After being laid off from the aerospace industry during the pandemic, Wade sought employment in the wastewater sector, where he could put his university degrees in chemistry and geology to good use.

“I grew up here and later used to drive past the plant on South Sheridan and wonder what was going on in there”, he said. “After aerospace, I was prepared to travel to wherever a good career opportunity became available in the wastewater industry. But as it turned out, there just happened to be a vacancy for an operator, right here in Valley Center”.

Situated about 12 miles north of Wichita, the 0.5 MGD (million gallon per day) wastewater treatment plant (built in 1979) serves 2,700 homes. It includes an extended aeration treatment plant, plus ultraviolet disinfection treatment. Solids removal prior to discharge into the Little Arkansas River typically ranges from an impressive 97.5%-99%. The recent failure of a mixer at Valley Center demonstrated the firm commitment that now prevails when the true cost of ownership is mapped out, only top quality, long-lasting equipment represents the best value for money.

“To be honest”, said Wade, “I didn’t really understand why the design of the existing mixer’s impeller was the way it was, but what I knew for sure was that it wasn’t very reliable – and that the cost of having it assessed and repaired was prohibitive.  The mixer (7.5HP) had been in use for 10 years, but had a seal-system that was just not user-friendly”.

Wade spoke with multiple equipment representatives, including Fluid Equipment of Wichita, who has been evaluating and repairing wastewater systems for over half a century. After listening to how Valley Center approached its purchasing, Jeff Ubben at Fluid Equipment recommended a Landia submersible mixer from its portfolio that sat at the top of their price bracket, but one that is set to last for 20-25 years.

‘Look for longevity, as well as best efficiency’

“I immediately liked the Landia design”, added Wade, especially the sealing system, which protects the most important part of the mixer. We have great cohesion in our team here at Valley Center, including our Infrastructure Manager, Ron Ekstrom, who has worked here for over 20 years. When we thoroughly weighed out all the pros and cons, we saw that Landia was the most expensive purchase. However, when I presented the total cost of ownership to the city, they could see that it made by far the most sense. Our administration definitely looks for longevity, as well as best efficiency, and in 10 years’ time or less, I don’t want an operator to have to deal with the same problems that I’ve had”.

‘A better job, even though it uses much less energy’

Jeff Ubben at Fluid Equipment, commented: “For the wastewater industry, it is very encouraging to see a young utility manager and a city push hard for better quality equipment that will stand the test of time. With a Landia mixer, Valley Center can see that they won’t have the annoying maintenance issues that lesser designed mixers will create. And as well as lasting much longer, the mixer we recommended will also do a better job, even though it uses much less energy”.

With its backward sweeping propellers, the design of the Landia mixer ensures that rags can’t cling on and damage the seals. The protective grease hub in the propeller guards the seals, and is hard to wash away. It acts as an important first line of defence against all types of debris. The Landia seal system is well proven and eliminates immediate and expensive seal fail condition.

Jeff Ubben at Fluid Equipment pointed out that Landia can very often reuse an existing mixer manufacturer’s guiderail, so that installation can proceed without the tank having to be emptied.

So again, despite Landia appearing to initially be at the high end of the price list, a retrofit doesn’t incur anywhere near the additional costs of other designs.

‘Hadn’t seen the basin ever mixed like that before!’

“Previously”, said Wade, “we knew that the old 7.5 HP mixer was working and mixing – to some extent – but when the Landia mixer was installed, we turned it on and hadn’t seen the basin ever mixed like that before! The volume that the Landia mixer put through, mixing the basin from the bottom up, was pleasantly surprising; changing the dynamics for a much better process all round. All of this, too, with just a 4.9 HP motor! The amp draw of the Landia gear-driven mixer is lower than what we saw with other manufacturers (7 amps compared to the 10 and 12 amps of the others). On just this one mixer, running two hours on, two hours off, we are making an energy saving of $58 per week, which is over $3,000 per year. The return on investment is a no brainer”.