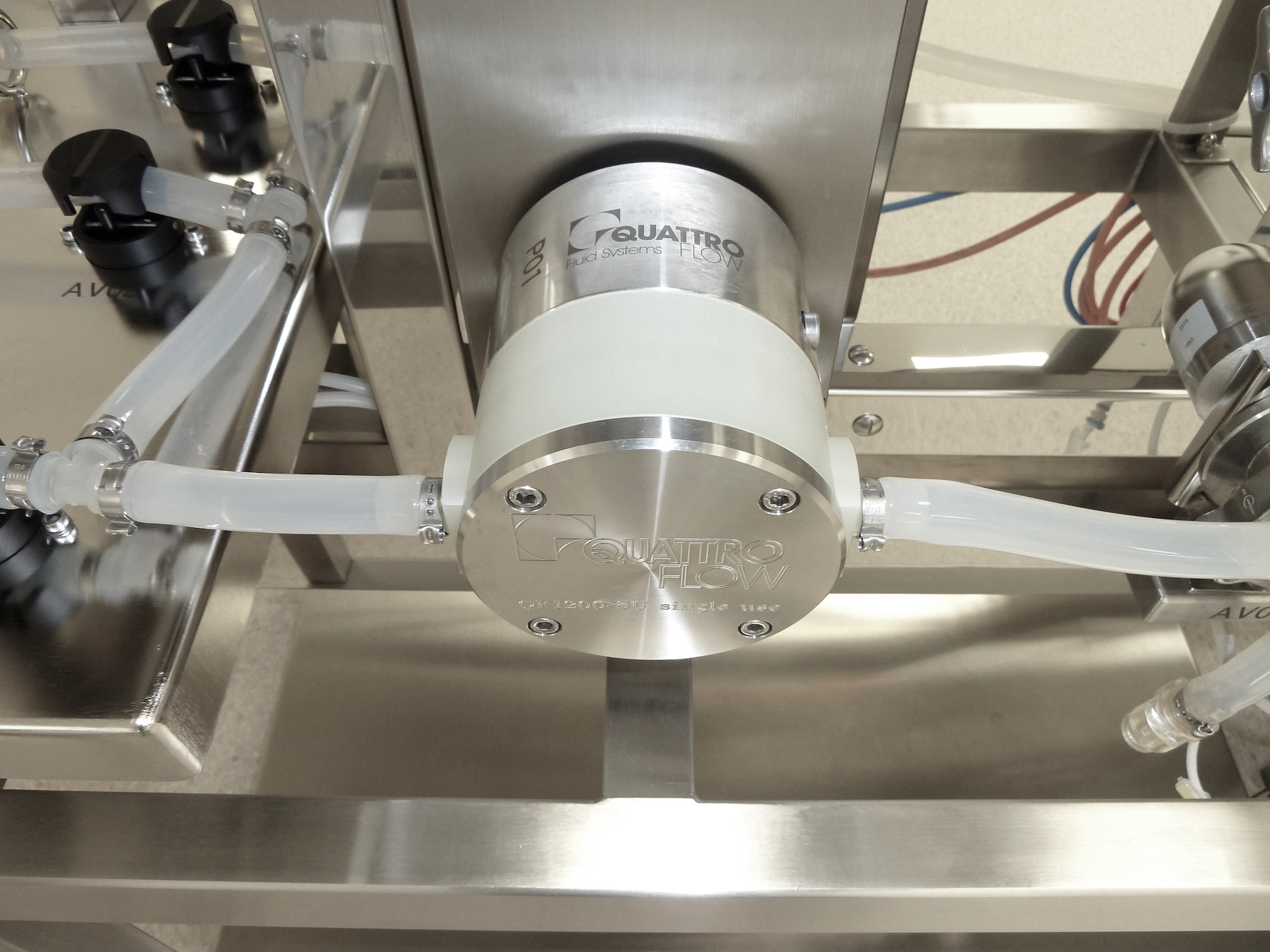 When attempting to describe the processes that are inherent to biopharmaceutical manufacturing, words like “complex,” “precise” and “pure” come to mind most often.

That being said, the importance of those terms would appear to make words like “fast” and “quick” incompatible with the production of biopharmaceuticals. However, that is not necessarily the case. You see, the most successful biopharmaceutical manufacturers are those that can reliably produce important drugs that are safe for human use while also getting them to market in a timely manner that maximizes the earning potential of patent windows.

This is where pumps become a critical part of the equation. Today’s most common biopharmaceutical-manufacturing systems require the handling, transferring, processing and purification of large-molecule drugs produced in living organism like animal-cell cultures, bacterial cells or yeast. This must be done in a liquid phase with the handling of these materials performed by pump technologies that can reliably provide volumetric consistency and accuracy, pressures and flow rates, and low-pulsation, which are required in the process, and low-shear, low-heat input and material compatibility that protects the biological drug from being harmed.

In general, the manufacturing process is separated in two main stages: The first is upstream processing, in which genetically modified cells suspended in liquid culture media are grown in bioreactors to produce the desired product. The second stage is the separation and purification of the target molecule from the cells and byproducts, which is called downstream processing. Traditionally, permanent stainless-steel pumping and processing systems have been used for these operations, but the time and cost needed to operate, clean, maintain and quality control the system before the next production run could commence became prohibitive. That led to a true innovation for the industry, the creation of single-use pumps that feature a disposable pump head and chamber that can be easily removed and replaced between production runs, eliminating the time and cost needed to revalidate the equipment in a stainless-steel system.

While single-use pumps have been an undoubted boon to biopharmaceutical manufacturers – with positive displacement quaternary (four-piston) diaphragm pumps becoming a go-to technology choice for many manufacturers – there were still improvements that could be made in optimizing their changeover times and simplifying the installation process. A breakthrough in this area came in 2017 with the development of a pump-chamber replacing system that reduces the time needed to replace a disposable single-use pump chamber to mere seconds.

First, we should take a step back and give some context to just how significant “complex,” “precise” and “pure” are to the biopharmaceutical-manufacturing process. The foundation of biopharmaceutical manufacturing rests on various types of unit operations. While each unit operation features its own set of operational criteria, they are alike in that they can only produce a viable, contaminant-free drug suitable for human administration if the manufacturer strictly adheres to an unbending set of operational parameters and structures.

Here’s an overview of four of the more common unit operations in biopharmaceutical manufacturing:

The common thread between these various types of unit operations is their need for and use of a pumping technology that can satisfy their specific operational parameters. Again, these unit operations are processes in which the quaternary diaphragm pump excels, while competitive technologies, such as peristaltic (hose), lobe, centrifugal and piston pumps, may struggle to meet a series of strict product-handling and -transfer requirements.

Some additional mention must also be given to the advantages that utilizing single-use quaternary diaphragm pumps in biopharmaceutical manufacturing can deliver. The main advantage for these pumps – whether used in traditional stainless-steel or single-use setups – are their unique form of operation: The four quaternary diaphragms are driven one after another by a connector plate, which moves back and forth out of its central position in a stroke that is generated by an eccentric shaft, with the length of the stroke determined by the angle of the eccentricity. The four pumping chambers, which actually operate in the same way the human heart does, keep the product flow constantly moving forward in a volumetrically consistent low-shear and low-pulse manner.

The pump’s chambers also contain no rotating parts that can be subject to friction, meaning that there is minimum heat buildup that can compromise the product. This mode of operation means that the pumps can run dry, are self-priming, and produce minimal shear because of low slip. In addition, they offer low-pulsation, leak-free operation while having great dry/wet suction-lift capabilities.

This turndown capability and range for quaternary diaphragm pumps is also unique in the biopharmaceutical industry. As the products go from development to clinical trials and then to commercialization, proper scaleup is essential. In other words, the same pump in a lab may need to handle flow rates as low as 1/2-ounce per minute while also being able to deliver commercial production flow rates of 50 gallons per minute or more.

The quaternary diaphragm pump is also easily adaptable to single-use production configurations. A single-use pump enables biopharmaceutical manufacturers to essentially eliminate the oftentimes-prohibitive cost of cleaning and validating their pumps and systems. The result is a quicker and more cost-effective production process and one that still delivers preferred levels of product purity and sterility with no chance for cross-batch or cross-product contamination.

The fulcrum of the single-use pump is its product-wetted plastic pump chamber that can be replaced as a complete unit.

The Next Step Forward

So, now we arrive at the next step in the evolution of the single-use quaternary diaphragm pump that is used in unit operations within biopharmaceutical manufacturing. While single-use pump technology conquered the question of how to reduce cleaning and revalidation time and costs after production runs, there was still more ground that could be plowed in the realm of reducing the time needed for pump-head replacement.

The breakthrough came last year with the development and release of the pump-chamber replacing system, namely the EZ-Set model that was created by Quattroflow™ Fluid Systems GmbH, Kamp-Lintfort, Germany, a product brand of PSG®, Oakbrook Terrace, IL, USA, a Dover company. The system essentially eliminates downtime in the production-changeover process, which leads to further optimization of the product-development timeline. It allows manufacturers to replace a single-use pump chamber in 30 seconds or less without the need of torque wrenches, or other special tools and equipment – all while allowing the user to be able to wear rubber gloves during the replacement process. Pump-chamber replacing systems can also be retrofitted on existing motor drives, which also makes upgrades quick and easy to perform.

The markings on the side of the pressure plate, which show a minimum through maximum range, let the user know what the clamping force is since it is important to have the proper level of compression on the pump drive. In fact, the pressure plate is so simple and easy to dial in, that no physical strength is required, meaning that everyone from a kindergartner to a weightlifter can install the pressure plate.

Many skills are needed to produce biopharmaceuticals, but in the end the final product must be one that is unquestionably safe to use while simultaneously allowing the manufacturer to reap the financial benefits of an optimized patent window. The arrival of single-use pumps on the scene has virtually eliminated the cost and downtime that were previously required to clean and validate pumping systems. A further leap ahead has been taken, however, with the creation of the pump-chamber replacing system, an innovation that will continue to optimize time, cost, reliability and safety capabilities in the ultra-important biopharmaceutical-manufacturing industry.

Quattroflow™ develops and manufactures, in close cooperation with our customers, quaternary (four-piston) diaphragm pumps specifically designed for critical applications in the biopharma as well as food and beverage industries. The Quattroflow pump's method of operation allows it to gently, safely and securely convey aqueous solutions and biological ...